In the dark of the night they come from all over the world, trespassing through the desert, tunnels or airports disguised as tourists, students and “birth tourists” to have their babies in America.  Willing intentionally to procreate and passing us the bill saturating our system. In a few decades, they will be the majority. They will take power and impose their cultures, religions, and the backward and problematic modus vivendi of their original countries.

While we pay dearly to win wars overseas, we are losing the country without detecting this strategic invasion fomented by foreign governments.

1.  The general sentiment of the majority of legal immigrants on the creation of “Sanctuaries for illegal immigrants” in the United States is mostly opposed because it is unfavorable to the nation and unfair for legal immigrants, no matter which country they come from. This widespread discontent of legal immigrants with the illegals was the key to Donald Trump’s victory in Florida and Pennsylvania. We have to preserve and strengthen only the LAW, with equality to ALL.

2.  It does not make sense to reward, protect or render unattainable by laws, those who violate them.

3.  As a Maryland tax payer residing in Montgomery County, I am outraged at the ban on our police sending immigrant criminals to the immigration court. I can only imagine what will become of our neighboring Howard County which has been invaded by “angels” moving to “sanctuary” where they are unpunished. I do not want this evil for our state and law enforcement.

For example, the County where I live is already a “sanctuary” of illegals, untouchable by the Police. They also are defended by the few “liberal” organizations founded by public money and private donations. This reality is sad and this action is causing enormous damage to the legal workers and small businesses owned by legal immigrants, with licenses and certifications as it is in my case.

4.  To invade a country is a federal crime and the place of the criminals is in jail, not in “Sanctuary”. Federal laws may be tough, but they exist for everyone and must be complied by all. Each country has its legal immigration system and must be respected,

5.  It is not fair to keep criminals (violating laws) in shrines paid for by public taxes. This is an absurdity that defies reason. Do those who defend such “illegal sanctuaries” make up the majority and is the minority able to afford the costs?

6.   If our laws are harsh or impartial, they should be modified by legislators, observing the democratic process, where the majority decides at the national level and the minority has to respect them.

7.  The costs of illegal immigration are paid for by native citizens and naturalized citizens. Our health, safety, education, transportation, and infrastructure systems are saturated as a result of “illegals.”

8.  The relationship of cost and benefits, in reference to illegals, is visibly unfavorable to the nation and unfair for legal immigrants regardless of what country they come from.

9.   If a US citizen commits a crime, he does not go to a sanctuary, he goes to jail. Why are those who violate a federal law to be considered untouchable by law? That would be an unfair prize in relation to ‘citizenship’ as a whole, more than that, it would be a stimulus to illegal immigration.

Municipal  and State police have the patriotic, moral and legal responsibility to cooperating with the Federal government to enforce immigration law.

After “illegal alien” shooting death of Kathryn Steinle in San Francisco, CA (a sanctuary city) July 8, 2015, Hillary Clinton commented to CNN, Eric Bradner: “The city made a mistake, not to deport someone that the federal government strongly felt should be deported. I have absolutely no support for a city that ignores the strong evidence that should be acted on.”

10.  Nowhere in the world do immigration laws privilege or create “sanctuaries” for those who become criminals by invading houses, territories or nations.

11.   Most illegals that cross the border raise children here so that when they reach the age of majority, the country will legalize them. They invade premeditatedly and intentionally to form families and then accuse our laws of separating their.

12.   In Switzerland, it is not enough to be born in its territory to be automatically considered a citizen. Our legislation needs to be updated, with strategic responsibility, as it facilitates and encourages the silent invasion that will destroy us in the long run as a nation.

13.   The United States, being a generous nation,  does not necessarily have the humanitarian or moral responsibility to welcome refugees or immigrants who escape the issues that their corrupt or inept governments cannot resolve. We have our priorities with our veterans and our own citizens, as a nation. We must offer humanitarian aid to them, within our means but within the borders of their respective countries.

14.  Whilst it is still possible, we must be responsible enough not to leave our future generations with a country where the laws are nothing more than abstract regulations.

15. The wall will give create a huge loss for the Mexican government, especially with a halt on its humans and narcotics trafficking into the United States. This informal and criminal industry have a strong importance for the Mexican economy. The “humanitarian flag” that they wave is only being used as a cover for this reality. Mexican immigration jails are filled with Southern and Central American immigrants. Mexico has no tolerance for immigrants entering their boarders unless a major price is paid first, however, they plead for the United States to treat their immigrants fairly when when they cross our boarders.

16.  The United States should, first and foremost, be a country that defends its own citizens, legal immigrants, and permanent residents that we love, respect and who make our country so great. In the naturalization ceremony we swear allegiance to this country and the defense of the values of justice and democracy that are the pillars of this nation.

17.  The laws must prevail over the interests of “all tribes” and philosophical or ideological nuances.

18.  Our ideals and values are for a free and democratic world where there is no sanctuary of lawbreakers. We love this Nation. 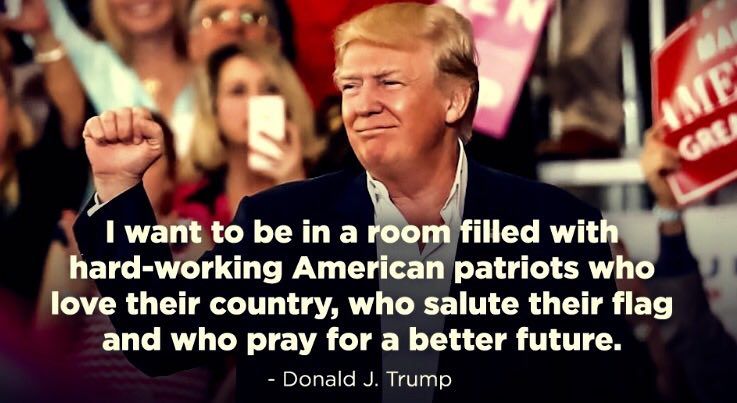