ADAMAR RESTS IN PEACE IN THE HISTORICAL CEMETERY SANTO ANTÔNIO, IN PORTO VELHO –RO, NEXT TO THE NORTHEASTERN PIONEERS, JAMAICANS, AMERICANS AND ENGLISHMEN WHO HEROICALLY DEDICATED THEIR LIVES TO THE CONSTRUCTION OF THE CELEBRATED RAILROAD MADEIRA-MAMORÉ (EFMM), WHICH WOULD PHYSICALLY BRING BRAZIL CLOSER TO BOLIVIA

Born in 1933, in the state of Pará, Adamar was a dentist, a community leader, a youth counselor, and a musician whose work had a high social relevance inAmazon rivers. After her marriage, Adamar and her husband, Jairo, decided to return to Manaus and buy a small diesel boat, which they named ‘Jaimar’, a fusion of their names (Jairo and Adamar). In the boat, they set up a mobile dental clinic with the objective of assisting the riverside populations on the margins of the rivers Negro, Solimões and

The trajectory of Adamar Sales Saraiva, an admirable example of dignity, was interrupted on November 16th, 2012, as she fell victim to a traffic accident in Porto Velho, capital of Rondônia.  In this context, I would like to request the biographical account in epigraph be transcribed into the Annals of the House. Adamar was honored on February 6th, 2017, by Senator Alvaro Dias, in the terms of the speech published by the Senate Gazette:

Your Excellency Mr. President, Congressmen and Congresswomen, as I greet you, I come to the rostrum of the Federal Senate to register the memorable journey of Mrs. Adamar Sales Saraiva, synthesized in a dense biographical report by her son — Samuel Saraiva — entitled “Example of Love, Faith and Dignity.” I emphasize that her emblematic trajectory in life is an example of citizenship. I reproduce some excerpts from that account.

“It was Christmas season, the beginning of that rainy Amazonian winter in Lago do Salé, Juruti Territory, Óbidos County, in the State of Pará. The clock struck 9:00 pm on December 4, 1933, when the first sounds of a baby were heard, as it awakened to life in that humble mud hut in the rural area of Juruti — Igarapé-Assú Community (now Tabatinga) — to the joy of its parents, Antônio Sales de Farias and young Tertuliana Paiva de Farias, who christened it with the name Adamar. Graceful, docile, and smiling, she soon captivated the hearts of her paternal grandparents, Antônio Ferreira de Farias and Francisca de Paula Sales, and her maternal grandparents, José Alípio de Paiva Palhão and Maria Antônia da Conceição Paiva.

“In that blessed magical moment, the ‘sand clock of time’, called the hourglass (invented by the monk of Chartres, Luitprand, in the eighth-century), began to count back time for Adamar. One year, five months and eight days had passed since her birth when her mother, the hardworking farmer Tertuliana, died of complications in childbirth, at the age of 35, on that fateful June 2nd, 1935, at 3:00 p.m., also orphaning her other children, Alvaro, Antoniana and Aloisio, who were then entrusted by their father to the care of family and friends before he left to form another marriage. In her somber childhood, the fraternal generosity of those who took care of her, inspired by the greatness of her soul, illuminated her steps. In the silence of the heartfelt absence, Adamar had as companions loneliness and the longing for the sublime maternal love that had been denied her, becoming an illusion that was present at every moment of her journey, which ended on November 16th, 2012, exactly at 7:50 pm, at the age of 78 years, due to hypovolemic shock and internal bleeding resulting from thoracic-abdominal trauma caused by a traffic accident in Porto Velho, Rondônia state.

“Expressing sorrow over her death, Fátima Cleide, Senator of the Republic at the time (president of the Education Commission of the Brazilian Federal Senate) testified to the tragic passing of the doctor who had assisted her family for years: ‘Dona Adamar was more than our dentist and faithful voter. She was an example. I admired her for her moral integrity, for being a dynamic woman in times when women we restrictly reserved to the domestic space.’

“About Adamar’s personality, the theologian and professor José Nilton de Lima, from the Adventist University of São Paulo, said: ‘She was a woman who left an admirable example of righteousness. I have no doubt that whoever goes to Heaven will have the joy of meeting again this hardworking lady, with a great soul and missionary spirit. I envy her with admiration, in life and in death.’

“She faithfully mirrored her life in her mother’s example, as she was told by those who knew her and cultivated in her soul the seeds of good morals and decency that she zealously observed throughout her journey. To the incalculable loss suffered by her little girl’s heart was added the separation from her siblings, who, also by an imposition of fate, had to walk down different paths. Adamar followed her path with resignation. Initially, she was taken in by an uncle, and later lived with her cousin Otacília, before being accepted by a Catholic boarding school where she stayed until her adolescence.

“She behaved with nobility and dressed soberly and discreetly, without concealing elegance. She believed that a woman becomes virtuous through her intellect and moral values. At the age of 22, the young saleswoman and dental prosthetics student met the military nurse and former Brazilian combatant of the Second World War Jairo de Freitas Saraiva — son of Luiz Rufino Saraiva and Maria de Freitas Saraiva —whom she married on January 7th, 1955, in the Municipality of Parangaba, District of Fortaleza, in the State of Ceará. 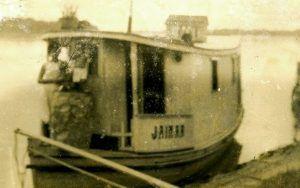 THE SAGA IN THE AMAZON RIVERS

“Adamar graduated in Dentistry at a very young age, in Belém do Pará, in a class composed of few women. Soon after their marriage, she and her husband decided to return to Manaus, the city where they had met by heavenly designs. They decided to buy a small diesel-powered boat, which they named Jaimar, after both their names (Jairo and Adamar). In it, they set up a mobile outpatient dental clinic with the objective of providing assistance to the riverside populations along the banks of the rivers Negro, Solimões and Madeira.

“Fearless, she soon learned the secrets of the activity in the small boat that she herself captained. At that time, prosthodontists were active in all areas of dentistry, from the treatment of dental fistulas, tooth extractions, fillings, dressings, and the making of dental prostheses to the filling of cavities with lead and the application of pivots. The profession was strongly linked to the Brazilian history thanks to the ‘alferes inconfidente’ Joaquim José da Silva Xavier, known as Tiradentes.

“She never refused to treat anyone for lack of financial resources, and in order not to embarrass humble patients, she often accepted acai, cupuaçu, manioc, fish, and pets as barter for the services rendered, practicing her faith in community service.

“Besides a few personal belongings and the lovingly-kept dental instruments with which she exercised her profession as if it was a sacrament, Adamar left a stellar legacy of kindness, detachment, and solidarity to the lives that crossed her path.

There are unforgettable events in human life that leave truly indelible traces in the hearts of those who witness them.

“The kind dentist used to talk with pleasure about her many experiences with God, which revealed her unwavering faith. She said that once, in a remote place in the Amazon jungle, after the boat had lost its propeller, the food ran out. Everyone there began to be very hungry. Trusting in divine providence, she did not give up: she knelt on the ground and cried out to the Lord for a miracle.

“After the prayer, she asked the driver to go to the river bank, because there would be the food she had begged God for. When she returned, she had with her about ten kilos of native yuca found in that place, where there were no inhabitants, let alone crops grown by human hands. This was one of the many experiences that she enjoyed sharing. Adamar had the habit of exalting the Creator with her constant praise and deep gratitude for life.

“Adamar was a simple woman and an exemplary mother, whose love, detachment, and understanding reflected goodness. Her actions were based on constancy, dedication, and perseverance, always guided by serenity. She always responded with the wisdom of those who have unraveled the mysteries of life, and with the same simplicity that had accompanied her since childhood, content to truly love even those who at some moments, overshadowed by ingratitude, had made her heart bleed with sadness, in the most eloquent silence.

“She was strong as a rock in her unshakable faith in God, but sensitive to the weeping and suffering of the underprivileged, some of whom fate only allowed to receive an embrace from her, which they eternalized with respect and as a mark of infinite love.

In return for what she projected, she received the love and attention of those she helped, easing pains and difficulties.

“As we review her writings, emotion invades our souls with sweet memories that testify to the feelings of a noble person who gave special and unparalleled meaning to those who had the privilege of crossing paths with her.

“A celestial tourist on Earth, Adamar offered a precious and exemplary legacy of charity, love and life. She kept a smile of inner peace, the same one that marked her last expression, like a delicate and nostalgic ‘see you soon’. She left behind the chronological sense of time that conditions earthly life, to begin the eternal journey of light.

Accepting the family’s request submitted by attorney Tiago de Oliveira Sá, the Justice of Rondônia authorized on October 22nd, 2019, the exhumation, transfer and inhumation of the remains of pioneer Adamar de Paiva Sales, from the Santo Antônio Cemetery in Porto Velho, to the Tabatinga Cemetery, Juruti district, located in Lago do Sale, State of Pará.

The burial in the lands of Pará, in the same grave of hermother, teacher Tertuliana de Paiva Sales, deceased at the age of 35, took place on November 15th, 2019, at 15:00, in the presence of family and friends.

Very well known in Rondônia, Adamar’s husband, the military man, poet, community leader and Christian Jairo de Freitas Saraiva is presented on the blog of his son, Samuel Saraiva. Born in Manaus (AM), he was a FEB expeditionary who met Adamar, got married, and settled in Porto Velho, capital of the Guaporé Territory at the time, during the government of Jesus Burlamaqui Hosannah (1952). Jairo was encouraged, as an ex-combatant, to join the Territorial Guard, in the rank of Petty Officer, asan entry-level position. He retired decades later with the rank of Captain.

Ref:   https://www25.senado.leg.br/web/atividade/pronunciamentos/-/p/texto/428785 She died on November 16, 2012 at 7:50 pm, with the cause of death being hypovolemic shock and internal bleeding, resulting from the fateful traffic accident caused by the recklessness of the driver of the vehicle that transported her, who also died later.